WASHINGTON, DC - Tap water in many large metropolitan areas is polluted with a cocktail of chemical contaminants. These pollutants usually don’t violate any legal standards, but they often come in potentially toxic combinations that raise serious questions about the long-term safety of drinking the water. Pensacola, Fla.; Riverside, Calif.; and Las Vegas top the list of major cities with the most contaminated tap water. 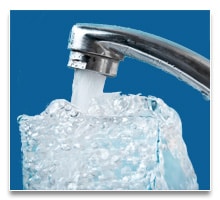 In an unprecedented analysis of 20 million tap water quality tests performed by water utilities between 2004 and 2009, Environmental Working Group (EWG) found that water suppliers detected a total of 316 contaminants in water delivered to the public. Environmental Protection Agency (EPA) has set enforceable standards for only 114 of these pollutants.

Another 202 chemicals with no mandatory safety standards were found in water supplied to about 132 million people in 9,454 communities across the country. These “unregulated” chemicals include the toxic rocket fuel component perchlorate, the industrial solvent acetone, the weed killer metolachlor, the refrigerant Freon and radon, a highly radioactive gas.

By failing to clean up rivers and reservoirs that give drinking water for hundreds of millions of Americans, EPA and the Congress force water utilities to spend heavily to make contaminated water drinkable. According to industry market studies, utilities spend more than $4 billion a year on water treatment chemicals alone. Less than one-twentieth that amount is invested in source water protection and pollution prevention, an average of $207 million a year.

“Utilities do the best job that they can treating a big problem with limited resources,” said Houlihan, “but we must do better. It is not uncommon for people to drink tap water laced with 20 or 30 chemical contaminants. This water may be legal, but it raises serious health concerns. People expect better water than that, and they deserve it.” 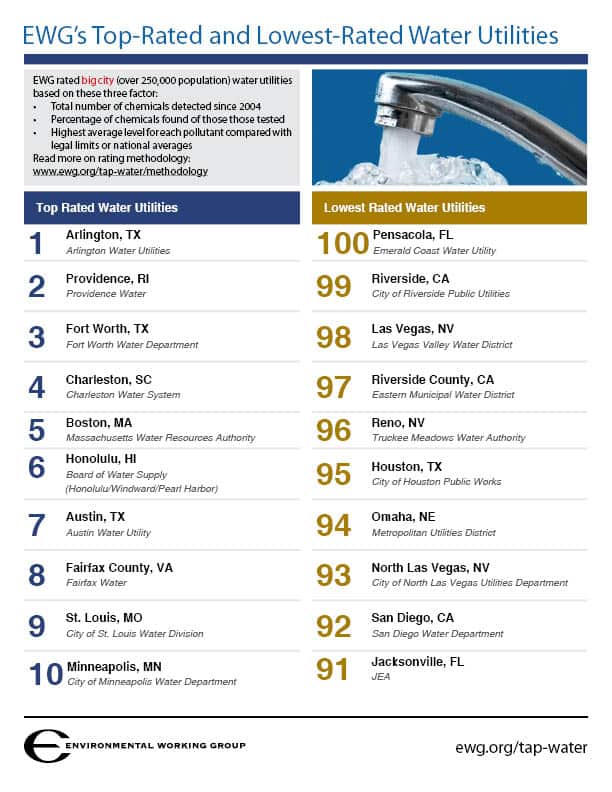 Federal law does not require tap water to be safe for long-term consumption; the long-term risks of cancer and other health threats are balanced against the cost and feasibility of purification. As a result, health officials acknowledge that legally binding contamination limits typically allow exposure to levels of pollutants that present real health risks. For hundreds of other contaminants, there are no legal limits at all — any amount is legal. 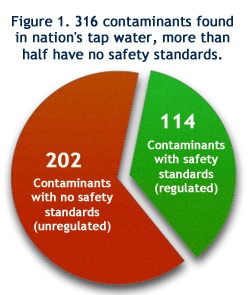 Some communities have made a commitment to deliver safer water, with dramatic results. Boston had a serious contamination problem that peaked in 2004-2005. After installing a new filtration system and changing treatment techniques, the regional water system now delivers some of the highest-rated big city water in the country. It has also committed to a well-protected reservoir system, a key to preserving the long-term effectiveness of the new techniques.

Tap water contaminants come from a variety of sources. EWG’s analysis revealed 97 agricultural pollutants, including pesticides and chemicals from fertilizers and manure-laden runoff; 205 industrial chemicals linked to factory discharges and consumer products; 86 contaminants that originate in polluted runoff and wastewater treatment plants; and 42 by-products of water treatment processes or pollutants that leach from pipes and storage tanks.

“In most U.S. households, pouring a glass of tap water means exposing families to hundreds of distinct chemicals and pollutants, many of them completely unregulated,” said Houlihan.

Across the country, consumers are seeing higher bills for their water even as the number of unregulated pollutants, from pharmaceuticals to fuel additives, is also rising.

There is plenty of evidence that Americans already have doubts about the safety of their water. In March 2009, a Gallup poll found that Americans rank water pollution as their number one environmental concern. A startling 84 percent reported being worried “a great deal” or “a fair amount” about pollution in their drinking water.

As a result, millions of Americans have taken to buying bottled water in the misguided belief that it’s safer, even though the source of many very popular brands is nothing more than treated tap water.

Until the federal government invests significant resources on modernizing infrastructure and enforcing tough safety standards, the only option left to most Americans is to filter their own tap water.

EWG’s searchable database of water test results allows the public to see how the water in their community scores. The EWG researchers have also compiled an easy-to-use guide to water filtration systems now on the market. This guide helps consumers find the best filters for themselves and their families. Available online at the Environmental Working Group’s Tap Water Safety Guide.