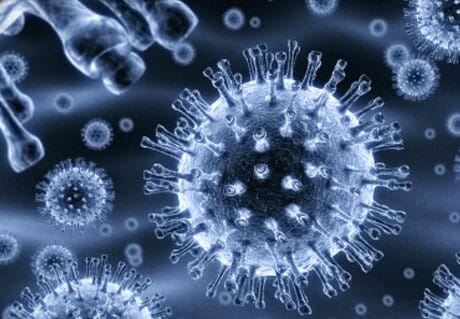 Hashimoto’s Thyroiditis is the most common form of thyroid dysfunction in the “modern world”. It is an autoimmune disease in which our own white blood cells attack the thyroid. It has long been puzzling why one part of the body would suddenly turn upon another, however research has found a link to autoimmune thyroid conditions such as Hashimoto’s and Grave’s disease and stealth viral infections such as Epstein-Barr and Cytomegalovirus. As a possible cause, it is very important to look to your medical history for clues of ongoing viral infection.

The thyroid is a small, 2-inch-long, butterfly-shaped gland located in the front of the neck below the adam’s apple. The thyroid has two lobes, one on either side of the trachea (windpipe). As a important part of the endocrine system, it produces vital hormones that affect practically every cell in the body.

The thyroid uses iodine to make two thyroid hormones, triiodothyronine (T3) and thyroxine (T4), the numbers associated each hormone indicate how many iodine atoms are attached to the hormone. T3 is the active form of thyroid hormone and is converted from T4 in the liver and digestive tract. Thyroid hormones affect every aspect of body function including metabolism, brain development and function, breathing, heart and nervous system function, body temperature regulation, muscle strength, skin dryness, menstrual cycles, weight, and even cholesterol levels.

Low functioning thyroid has long been associated with malnutrition, especially low iodine intake. This remains the main cause of thyroid disease in developing countries. In developed countries, iodine deficiency isn’t nearly as common. Most cases of low-functioning thyroid in the USA, Canada and the UK are associated with this autoimmune condition.

Hashimoto’s Thyroiditis, also known as chronic lymphocytic thyroiditis was first discovered in 1912 by Hakaru Hashimoto MD, a Japanese surgeon working in Berlin, Germany. He discovered a high number of white blood cells called lymphocytes in thyroid tissue of patients from whom he had removed swollen thyroid glands (goiters). These lymphocytes make the antibodies that start the autoimmune process. The two most common antibodies in this condition target thyroglobulin, which is a protein found in the thyroid gland, and an important enzyme used to make thyroid hormone called peroxidase. These antibodies are called anti-thyroglobulin antibodies and anti-thyroid peroxidase (anti-TPO) antibodies, respectively.

There appears to be a progressive increase in the number of cases of this autoimmune thyroid condition, which is 15 times more common in women than men. Currently, Hashimoto’s thyroiditis believed to affect 3.5 out of 1,000 women and 0.8 out of 1,000 men. While seen in adolescents and younger women, the average age of diagnosis is between 30 and 50, and men 45 to 65. A number practitioners, holistic and conventional find this condition usually begins without any symptoms. Keep in mind, this condition is often diagnosed after symptoms are present, and have progressed significantly.

More concerning, is that autoimmune thyroiditis is often found alongside other autoimmune conditions such as rheumatoid arthritis, lupus, type 1 diabetes, or Sjogren’s disease.

What are the Symptoms of Hashimoto’s Thyroiditis?

Before going further, it’s important to clarify that our topic in this article is different from subacute viral thyroiditis, which is a temporary inflammation of thyroid as a result of viral infection of the nose and throat.

The cause of autoimmune thyroid conditions have remained a mystery for many years. Viruses are not the only contributors to autoimmune disease, there are a number of other possible causative factors including bacteria, vitamin D receptor dysfunction, chronic stress, barrier breakdown, yeast, parasites, Lyme disease positive, food allergies, and environmental toxins (especially mercury). It is important to look at the complete medical history to find clues as to cause. Each of these causes will be reviewed in future posts, today’s focus is focused on the role of viruses.

What is often confusing about looking at Epstein-Barr virus (EBV) and its role in Hashimoto’s thyroiditis is its universal presence in the human body. Its estimately between 90 to 95% of adults have been exposed to and are life-long carriers of EBV which tends to live in immune cells. In fact, this infection is almost certain to be present in the human body by age 3 in developing countries and only half the children by age 10 in the developed world. Symptoms of an infection at an early age are typically minimal, if at all. When exposure occurs in adolescence, the infection is more symptomatic, and is called Infectious Mononucleosis.

The virus lives within a specific line of immune cells called “B lymphocytes”. It is these cells that create antibodies that identifies “self” from “nonself” and tags any foreign bodies found in the tissues for destruction. EBV must play a delicate balancing act to keep these B cells alive, but the longer these infected cells live, the more likely they are of becoming “autoreactive” meaning they produced antibodies to themselves which can in turn, result in antibodies attacking other tissues in the body.

Normally, a EBV infection can limited by CD8+ cells which find and destroy these infected cells.  However, new evidence suggests that certain genetic variance can result lower production of these CD8+ cells which then tips the scales in favor of the EBV. Those who are vitamin D deficiency produce fewer CD8+ cells. Such a deficiency is either due to insufficient sun exposure (fairly common) and/or due to genetic polymorphism (minor mutation) in the Vitamin D receptor. resulting in poor binding of vitamin D to its receptor (your humble author just such a genetic variance, and I keep my vitamin D supplement within arm’s reach).

Furthermore, between the genders, females tend to have fewer CD8+ which is one reason women are more prone to autoimmune diseases. Age also plays a role in likelihood of autoimmunity. As mentioned above, early exposure to EBV results in a minimal symptom picture due to a higher level of CD8+ cells in younger children. A typical 2 year old has three times as many CD8+ cells as a 15 year old.

Combine these various factors and its not difficult to imagine a hypothetical female living in the relatively hygienic developed part of the world, being exposed to EBV as a teen, resulting in a linger EBV infection that can spread to other tissues. Add in the prevalence of sunscreen use and the resultant vitamin D deficiency and we see a higher likelihood of an autoimmune condition developing.

Keep in mind, that the model of autoimmunity isn’t limited to the thyroid, as studies have found the same findings in rheumatoid arthritis, lupus, multiple sclerosis, among others.

If you have been diagnosed with Hashimoto’s thyroiditis, it is important to look at vitamin D levels, as low levels often make the autoimmune process much worse. If you had mononucleosis earlier in your life, then EBV may a contributor to your autoimmunity and testing to determine if its still active may be appropriate.

The information on this website is not intended to replace a one-on-one relationship with a qualified healthcare professional and is not intended as medical advice. It is intended as a sharing of knowledge and information from the research and experience of Dr. Soszka, who encourages you to make your own health care decisions based upon your research and in partnership with a qualified healthcare professional.

Dr. Soszka is a Naturopathic physician and licensed acupuncturist who works with patients helping them achieve optimal health and teaching them how to live a life that creates and maintains excellent health and an exceptional sense of well-being. Dr. Soszka is also an Adjunct Professor at the National College of Natural Medicine where he teaches Gastroenterology and other important naturopathic topics. He is currently accepting new patients at his North Portland clinic – Blue Sky Wellness.
← Previous Posts Next Posts →